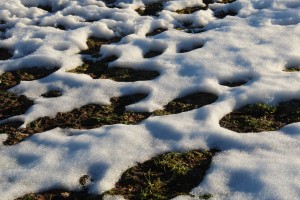 Gray snow mold becomes active as temperatures rise slightly above freezing and the snow starts to melt. Use these preventative methods now so you can have a green and healthy lawn next spring!

Prolonged snow cover may cause more than cabin fever. It can also hide conditions that may lead to gray snow mold. Luckily, there are precautions you can take now to limit or even prevent its appearance when the snow starts melting.

Gray snow mold is a fungus which lives in the soil and on infected plant debris. It goes dormant in the warmer months, and becomes active as temperatures rise slightly above freezing and the snow starts to melt.

As snow disappears, straw-colored circular patches of dead and matted grass emerge. They often continue to grow as long as the grass is wet and cool, or until temperatures reach about 45 degrees Fahrenheit. Snow mold will typically appear in areas where you have snow drifts, such as the snow banks that build up from shoveling the driveway.

Don’t worry: Your lawn isn’t dying. Fungicides are generally not needed or recommended for home turf. Instead, gently rake and remove the dead or browned grass. Your lawn will green up with regular maintenance.

To prevent snow mold from taking hold again the following year, schedule a day or two in the late summer/early autumn to perform the preventive tasks outlined above. Turf which is in good condition prior to the first snow, and which is well prepared for winter, will emerge healthier in the spring.